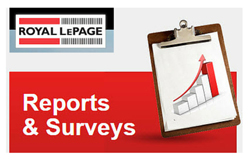 The Royal LePage House Price Survey1 released today showed double-digit growth in the prices of homes across the Greater Toronto Area (GTA). In the third quarter of 2016, the aggregate2 price of a home rose 13.6 per cent to $693,154 year-over-year.

When broken down by housing type, the median price of a two-storey home and bungalow in the GTA climbed 14.8 per cent and 16.0 per cent year-over-year in the third quarter to $812,990 and $688,813, respectively. Condominiums within the region also witnessed a healthy increase, rising 5.0 per cent to $381,963 during the same period.

The strongest growth during the quarter was found in regions outside of the downtown core, with all but Brampton, Milton, andMississauga outpacing home price appreciation in Toronto.

"Many homebuyers have continued to look towards the suburban areas of the Greater Toronto Area for affordable housing, as ongoing house price appreciation, chronically constrained inventory and an unprecedented level of demand has priced many purchasers out of the region's innermost markets," said Gino Romanese, senior vice president, Royal LePage. "For those focusing their home search within the core, this low inventory, high demand environment has increased instances of multiple offer situations, and caused prices to skyrocket further."

Recently, the continued outflow of migration from the city centre has spurred a noticeable shift in demographics within many of the GTA's suburban areas. Regions that once were industrial hubs have begun to gentrify as they transform into commuter cities, housing many young professionals looking for more affordable housing. As a result, house prices in these areas are also climbing.Oshawa, as an example, experienced the largest aggregate price gain of any region across the GTA in the third quarter, climbing 26.0 per cent year-over-year, while ten out of the eleven other suburban areas surrounding the city experienced double-digit price growth as well.

Firmly entrenched in a seller's market for the better part of 20 years, home prices in Toronto continued to climb during the third quarter of 2016, with the region experiencing a 12.1 per cent year-over-year increase to $714,002. Sustained domestic demand and severely low inventory levels, coupled with rising international interest have heated the marketplace further, causing multiple offer situations to become the norm.

Homebuyers continued to venture east to Scarborough during the third quarter due to its relative affordability and close proximity to the downtown core. The aggregate price of a home within the region climbed 13.1 per cent year-over-year to $583,760, as heightened levels of demand outpaced inventory within the region, inciting multiple offer situations and causing many to look to the region's condominium market with a median price of $279,761.

Seller confidence is at an all-time high in the York Region, with Richmond Hill once again experiencing one of the strongest gains in appreciation east of British Columbia. During the third quarter, the aggregate price of a home in the area surged by 25.7 per cent year-over-year to $1,074,829 due to the region's limited inventory and continued interest from foreign buyers. Homes inVaughan have also appreciated significantly over the same period, increasing by 13.5 per cent year-over-year to $846,481.

Domestic and international interest continued to drive prices higher in Markham, with many vying for the limited supply of inventory available within the market. Aggressive bids stemming from multiple offers influenced the significant jump in aggregate house price, up 15.2 per cent year-over-year to $870,353 in the third quarter.

Brampton saw its aggregate house price climb in the third quarter by 12.0 per cent year-over-year to $569,510, as many homebuyers continued to flock to the market, confident that prices will continue to rise into 2017. The region's affordability, stability and close proximity to the city's core made it an attractive option, placing further strain on inventory and causing numerous bidding wars as buyers continued to attempt to break into the market before it was too late.

Home prices in Mississauga continued to rise in the third quarter, climbing 9.6 per cent year-over-year to an aggregate price of$609,266. The region's close proximity to Toronto coupled with its relative affordability has led to a heated market where many properties sell within a week of being listed. As a result, prices and home sales continue to climb as inventory diminishes.

Milton to the west, saw home prices appreciate by a healthy margin in the third quarter, rising 10.5 per cent to $613,759 when compared to the same quarter last year. In the past three months, inventory within the region has not been able to keep up with the considerable demand stemming from young families looking to the region for reasonably priced properties. Milton's inventory shortage has been further exacerbated by a notable shift in the buying process where homeowners are electing to search for properties prior to listing their own as they are confident that their homes will sell quickly.

Low inventory levels across Oakville continued to drive prices higher throughout the third quarter, resulting in a significant year-over-year aggregate price increase of 15.4 per cent to $894,696. While foreign buyers represent a small, albeit growing, segment of the market, they have had a significant impact on prices, aggressively bidding for properties during multiple offer presentations and setting higher benchmark levels for subsequent transactions in the region.

Buyers continued to flock to the Durham Region in the third quarter of 2016 in search of affordable housing and stellar returns on their investment. Whitby and Oshawa saw some of the GTA's strongest house price appreciation, with the aggregate house price surging 21.5 per cent and 26.0 per cent year-over-year to $590,921 and $453,975, respectively. Pickering and Ajax also experienced a noteworthy uptick in aggregate house prices, increasing by 18.2 per cent and 12.5 per cent to $630,965 and$572,803 year-over-year, respectively. Inventory within the region has not been able to keep up with demand as many homeowners have elected to hold off selling in order to capitalize on further price appreciation or remove themselves from the competitive marketplace altogether.

"Consumer confidence suffered a direct hit when the federal government introduced new, more restrictive regulations in early October," said Soper. "While it is too early to say definitively, it appears Canadian homebuyers are adjusting quickly, and that fears of a hard correction were unwarranted. While the changes are significant, major lenders may already be using similar criteria when writing mortgages in sensitive regions like Alberta and B.C., so the additional drag on the market resulting from the new legislation won't be as great as it appears on the surface."